Before the craziness of yearn.finance (YFI) and Ampleforth (AMPL), the hottest token in decentralized finance was arguably Synthetix Network Token.

Trading with the ticker SNX, the crypto asset had seen a parabolic explosion higher. Synthetix Network Token is the native token of the Synthetix protocol, an Ethereum-based DeFi platform that focuses on offering on-chain synthetic exposure to altcoins, stocks, precious metals, and other asset classes.

But as CryptoSlate covered, the asset underwent a strong drop as capital cycled from altcoins into Bitcoin and Ethereum, which ripped higher.

SNX fell from its all-time high price of basically $4.00 to $2.62 in the span of a week. The altcoin has since bounced back, trading at $3.52 as per CryptoSlate data.

Data from crypto data from Viewbase shared by crypto commentator Humboldt Capital indicates that investors have largely been confident throughout this volatility.

Approximately 102,000 SNX — worth over $350,000 — have been withdrawn from leading exchanges that support it in the past 24 hours. This 102,000 SNX sum is about 1.7 percent of all of the cryptocurrency currently deposited on the exchange.

At this rate, assuming no deposits of the coin, all SNX will be out of exchange wallets in out of two months. 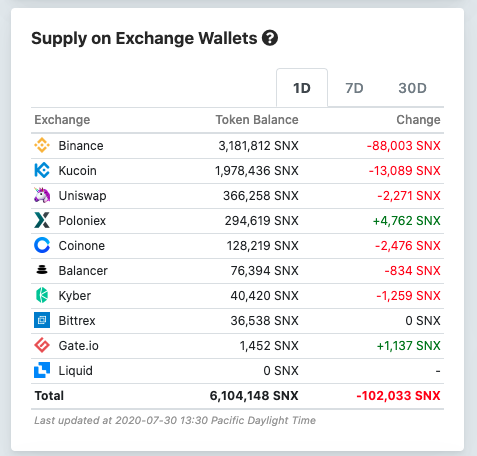 Although it isn’t clear what is being done with this withdrawn SNX, the withdrawal of a crypto asset from an exchange usually means it isn’t going to be sold. This means that these withdrawals should reduce potential SNX sell pressure, which should naturally lead to higher prices.

Long-term investors in the crypto asset as incentivized to withdraw the coin from exchanges as users can stake their SNX for rewards.

SNX bounce back above $3.00 unlikely to last, say some

SNX’s strong bounce from the aforementioned $2.62 lows is unlikely to last according to some commentators.

Ari Paul, CIO of BlockTower Capital, commented on the prospects of altcoins in a market where Bitcoin and Ethereum are trending and seeing large bouts of volatility:

“A big part of altcoins rallying for the last few months has been BTC in a tight range. IMO, most alts likely to underperform BTC if it breaks out in either direction. Historically, alts have generally done best when BTC takes a long pause after rallying substantially.”

Other commentators have made similar arguments.

Despite the approximately 20 percent surge in the past 10 days, Bitcoin remains in the beginning of an uptrend in volatility.

Mohit Sorout, a founding partner of Bitazu Capital, shared the chart below on Jul. 27. It shows that the Bollinger Bands’ width, a measure of volatility, remains at extremely low levels on a macro scale despite the recent surge. Should history rhyme, Bitcoin volatility should continue to increase, meaning altcoins will underperform.

After brief cheers, U.S. banks are back to bashing Bitcoin again